5 Sexist Words and Phrases I'm Banishing from my Vocabulary 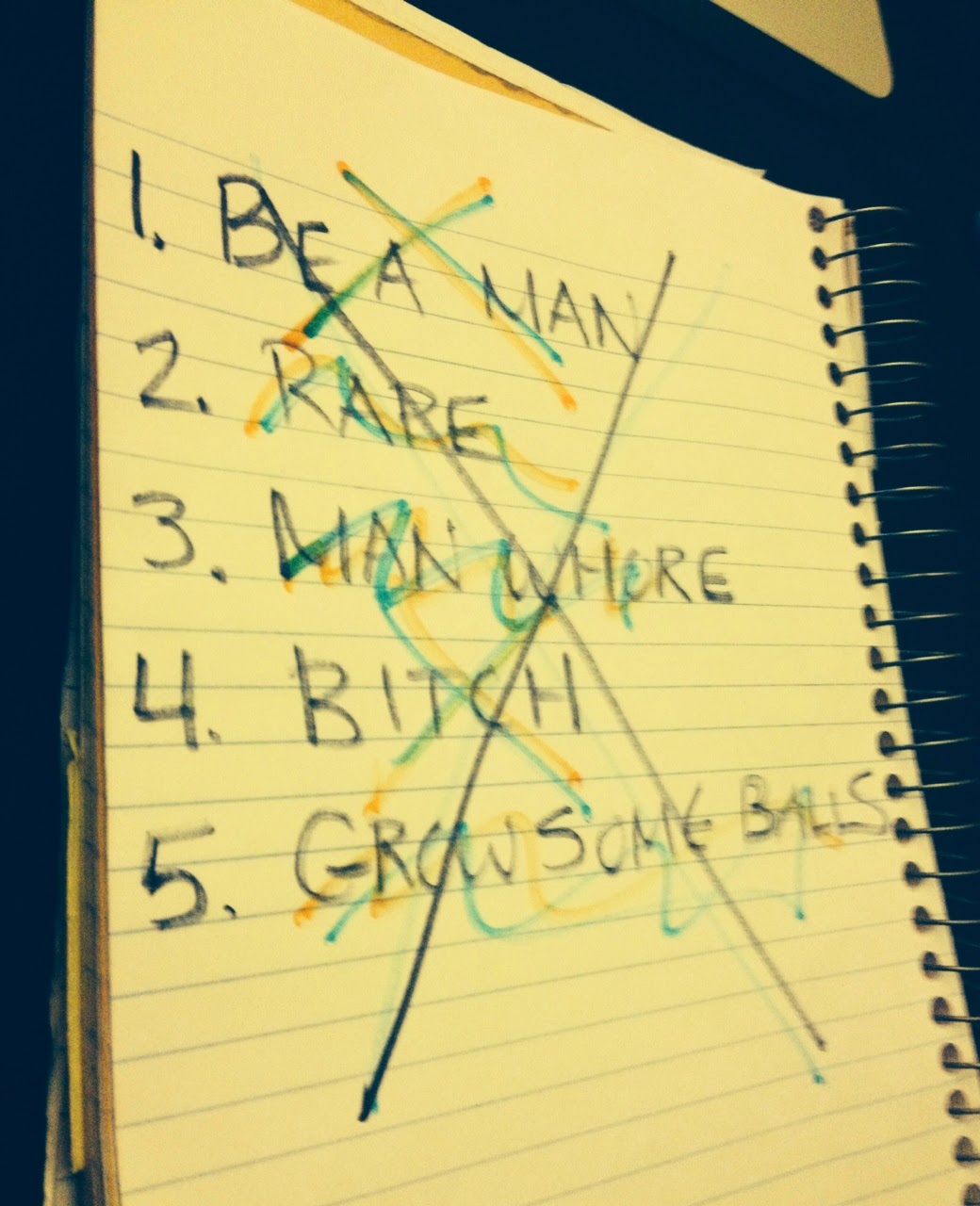 Words matter. I spent seven years studying English literature and I really, really believe that. Interestingly, it’s my work in gender studies that has made me more palpably aware of how and why words matter. There are many ways to express the same sentiment and often it’s not your ideas that will enlighten and delight or outrage and offend so much as how you communicate them.

In everyday conversation, we all say things offhandedly that we don’t mean or wouldn’t want to communicate if we thought more about the implications of those words and phrases. I’ve started noticing some of these idioms and I’ve started to interrogate them.

And I mean interrogate in the most dramatic sense of the word: I’m staring these words and phrases down and deciding whether or not they belong in my vocabulary and my life.

One of my internal tests is “is there an ‘opposite’ gender equivalent? If not, you’re gone!”

Here’s a few I’ve banished or am working on eradicating from my daily discourse:

There’s not one way to be a man and I’m sure I don’t know how to be one.  I am sure, however, that these expressions are thoroughly sexist and unfair to both men and women. Where is this Platonic ideal of manhood we’re comparing men to? These kind of phrases presuppose a normative definition of masculinity that is sexist and outdated. “Be a man” or “man up” are actually code for any combination of “don’t show weakness,” “don’t show emotion,” and “please uphold a narrow and normative definition of maleness based on machismo strength” or, “don’t be woman-like” (automatically raising all woman-ish qualities as inferior to man-ish ones and ultimately undesirable).

I’ve noticed, lately, some prostate cancer awareness commercials telling men to “man up” and go get checked. I appreciate that, statistically, perhaps men are less willing to go to the doctor for screenings than women, and particularly keen to avoid something so invasive. The intentions are good – encourage men to get checked and catch cancer early, and do it by appealing to men’s internalized notions of “being a man.”

We don’t tell women, however, to “woman up” to go get screened for breast cancer or ovarian cancer. And I’m sorry – how does a man’s prostate exam require strength and manliness while my breast exam (being medically groped) or pap test is considered easy? Until ads tell me to “be a woman” or “woman up,” I’m not into the male version.

This is less about pointing out that being a woman isn’t valued or exalted in the same way and more about pointing out how unfair and ridiculously sexist it is to reify traditional notions of masculinity, completely limiting and prescribing the range of acceptable behaviours for the male-identified.

2. “Rape” – used in any other context than sexual assault

“The government is raping our resources.” “We’re going to get raped in the playoffs.”

Sadly, rape is used in all kind of contexts to describe violently taking something from someone else.  Now, the Oxford English Dictionary does list as the secondary definition of rape: “The wanton destruction or spoiling of a place: the rape of the countryside,” however, the prevailing cultural connotation of the word rape is unequivocally one of sexual assault of a person by another person. So talking about resources and lands getting raped is extremely insensitive. It lessens the meaning of a word that matters, because rape victims matter. Don’t throw the word rape around.
3. “Man-whore”

Why man-whore? Is “whore” one of few generics where woman is the default and the modifier man is needed when it’s a man? Mankind, spokesman, manning the fort – man, man, man. Yet when we come to the label whore, we can somehow assume it’s a woman, because promiscuity is historically intertwined with femaleness.

So while man-whore may seem like a win for applying a derogatory word to both genders, it’s not. Linguistically, it only serves to reinforce women’s sexuality as deviant and shameful.

The same goes for “slut.” I’m as bothered by women calling other women sluts as I am by men saying it. Most of the time when people use the word slut they aren’t even referring to a woman's alleged sexual promiscuity; it’s her clothing, her demeanor – something entirely divorced from and irrelevant to her number of sexual partners. As though that’s up to you to police, anyway.

Yet, somehow, when we call men bitches we’re actually comparing them to women, yet in none of the aforementioned ways. Somehow, calling a man a bitch suggests that he is weak, small, afraid, effeminate, un-masculine. So, in essence, the term is doubly offensive to women.

I’m not advocating for “proper” derogatory terms – mean names are mean. But I’d rather be called a jerk or an ass than a bitch.

This term is the one I’m most self-conscious about. As those who know me know, I’ve never been much for name-calling rampages, but I have referred to people as bitchy or bitches. This is something I hope to never do again if I can help it.
5. “Grow some balls,” “grow a pair,” and “ballsy”

Do we say grow some ovaries? (Hey mom, grow some ovaries and tell me to my face!) No. And using “grow some balls” to women isn’t the solution. That isn’t gender equality. No matter who you say it to, the expression still holds balls – testicles, of all earthly things – up as a pinnacle of strength and fearlessness. No thanks. I may be all the things you infer when you say “ballsy” but I'll take another adjective.

Once you start defamiliarizing what we say and how we say it, our colloquial speech can leave a lot to be desired.
Posted by Zaren Healey White at 11:21 PM