What is a slut?

How old were you the first time you were called a slut?

I ask it this way because, if you’re gendered female, I’m assuming you’ve been called a slut. I’m banking on the fact that, at some point in your life, maybe even young life, someone has used this word against you or, at the very least, implied its meaning using some other word or insinuation. I assume you’ve been called a slut because, if you’re a girl or woman, that seems to be enough.

I was 14 or 15 the first time I remember being called a slut. It wasn’t said to my face – it was said about me, by a boy the same age, at school. It was said to others and quickly repeated back to me. Why? I recall it had something to do with wearing black tights with a pink skirt. Not fishnets, not that that should make a difference, but it’s worth mentioning the subtle distinction since certain clothing items have become so irrationality iconized to represent certain forms of sexuality. Black patterned tights, perhaps with a criss-cross or lace pattern, and a pale pink mini skirt. The words “skank” and “stripper” may also have been used.

Not surprisingly to those who know me, even as a weird, high strung, perfectionist ninth grader, with a fraction of the self-confidence I have now in my late twenties, I wasn’t really upset. I remember feeling uncomfortable, like my body was being evaluated, appraised, and dissected, without my permission. But I wasn’t ashamed. I was mad.

It’s an early memory that has stayed with me in the ~ 13 years since. I was fortunately able to recognize how preposterous, stupid, and unfair the words were. Some girls don’t. They may internalize and even believe it. Luckily, it had the opposite effect on me. I didn’t then have the language and knowledge to describe what I felt, but I later found it, through feminism. In this way, I don’t think I put on the mantle of feminism so much as I found it through having other mantles – identities, names – forced upon me.


What is a slut?
Any dictionary will show you its origin as a pejorative for female promiscuity. A slut is a “loose” woman, a woman with “too many” sexual partners. Its original usage is also linked to a description of women as dirty or unclean, especially servants and maids.

So we have two separate but intertwined definitions of slut: sexual woman, and dirty woman.

It’s not surprising, then, the deeply entrenched conflation of female sexuality with uncleanliness and transgression.

If you’re at all familiar with the trajectory of ideas about women’s sexuality that evolved throughout the nineteenth-century, you’ll know there have always been extreme anxieties about 1) the mere existence of women’s sexuality and pleasure in sex, and 2) fears about how it could be expressed. Women’s sexuality was dangerous: something to be controlled, yet something that could be – and was, and is – used against them when convenient to maintaining the status quo.

To borrow from some of my own work on depictions of female sexuality as transgressive and criminal in nineteenth-century literature: Although one prevalent nineteenth-century ideology held that women were naturally “passionless,” Nancy Cott explains that “views of female sexuality were also double edged: notions of women’s inherent licentiousness persisted, to be wielded against women manifesting any form of deviance under the reign of passionlessness” (220-221).

We only need to look to how narratives portray female sexual appetite and experience to see the long history of emphasizing its corruptive potential; women who excessively seek pleasure, especially at criminal costs, are depicted as reaping shameful and violent consequences.

This was true of how authors depicted sex workers in the Victorian era, and it’s terrifying to think of how these narratives have likely served to reinforce anti-sex work rhetoric today: the idea that the work is inherently bad, immoral, and dangerous, and that no other outcome is imaginable. The nineteenth-century popularized the moralized narrative of a prostitute’s inevitable ignominious downfall, demise, and likely death, a trope that Karen J. Renner refers to as “the harlot’s progress”: “a slow decline from brothel to street eventually ending in death” (236).

Let’s not pretend that, in 2015, we have nothing remaining in common with the 1800s. Beyond the everyday microaggressions, condemning women’s sexual autonomy is still wielded on larger scales when convenient.

It was only a couple of years ago (2012) that conservative dingbat Rush Limbaugh called an outspoken student advocating for contraception coverage a slut.

All a woman has to do is think about having sex – let alone enjoy it – to risk being called a slut.

In an immediately contemporary media example, Jeremy Renner and Chris Evans (who portray Hawkeye and Captain America in The Avengers movies) this week referred to character Black Widow (played by Scarlett Johansson) as a“slut” and a “whore” in an interview.


The interviewer asked them to talk about the character’s relationships, and how Black Widow didn’t end up with either one of their characters. Renner replies “she’s a slut” prompting exuberant laughter and chest clutching from Evans who chimes in with “complete whore.” Awkwardly, the female interviewer goes on to call her “the sidekick...flirting away.”  It would have been great if Evans had reacted to Renner’s initial comment with some disapproving side-eye and shut it down but he didn’t because…bros.

Great. Girls and women have few female superheroes to look to in media anyway, and we all already know how they’re excessively sexualized and treated primarily as love interests and sidekicks as it is. You only need to look at the spoof illustrations of what it would look like if all the Avengers were depicted like Black Widow to see the issues. 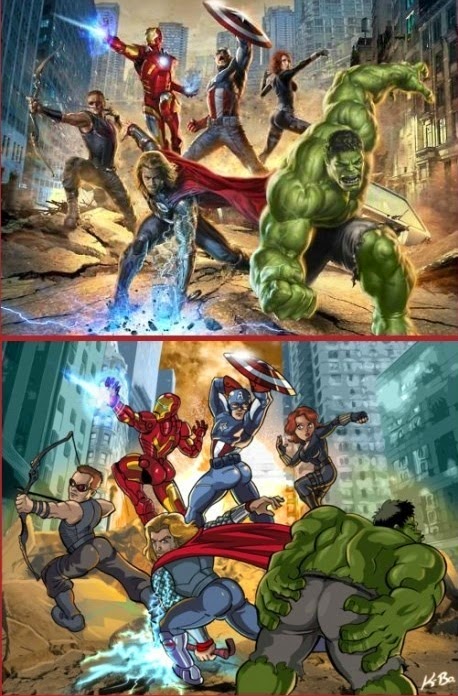 Here’s a good article about precisely why Renner’s and Evans’s comments are problematic, even though they were discussing a fictional character.

The history, evolution, and current deployment of the word slut is too complex for this single post. I don’t intend to do a thorough reading of how the word is being used by women as part of a reclamation – my interest here is how the word has been deployed against women.

I am, though, particularly fascinated by, and will continue to read more perspectives on, issues surrounding the reclamation of the word slut as well as the ideologies and goals underpinning Slut Walks and other demonstrations. While I absolutely agree with a march focused on how feminized bodies should be able to wear anything, or nothing, and walk down the street free from harassment and the insidious impacts of rape culture, there is a larger and deeper conversation around the function of privilege involved in reclaiming the word (and great articles online arguing all sides if you want further reading).

It seems slut often has very little to do with actual sexuality in terms of how the word is used. I was called a slut in Grade 9 for wearing black tights; it certainly had nothing to do with my sexual history (which was virtually non-existent beyond some steamy make-outs and over-the-clothes groping). I had no reputation. I wore clothing, and I wore it confidently. I put fabric on my body, which, by cut, pattern, or colour, someone decided was indicative of sexuality.

It was around this time, in junior high, that my body truly became, at times, unbearable – not intolerable, but unbearable, in the sense of feeling the weight of having a body gendered female (see Susan Bordo’s “Unbearable Weight: Feminism, Western Culture, and the Body”). And no, it wasn’t puberty – I got that glorious (read: horrendous) metamorphosis out of the way very young. I mean, due to my own maturation and the “maturation” of those (especially boys) around me, my body started to be on display in a way I wasn’t used to.

Around the same time as the slut comments, I was playing Juliet in the school play.  Between being talked about and mocked after a pantyline (gasp!) was visible in one white nightdress costume, to when the school rumour mill decided that my boob “popped out” (yes, flew right out without my knowledge!) of my shirt during Juliet’s suicide, my body felt analyzed, critiqued, and no longer my own. Perhaps not surprisingly, I had at eating disorder and was limiting my eating at this same time.

Would my body ever be my own again?

We need to think about the messaging involved when we: send (girl) kids home for exposed bra straps (here’s a previous blog post by me on that topic); continue to perpetuate that female breasts and nipples are inappropriate and sexual, when men’s are not, even in the act of breastfeeding and ban those images; use PhotoShop on teens’ yearbook photos to change their clothing, and all the other myriad ways we police bodies. How we police bodies is not uniform among all bodies – close attention to the intersections of gender, sexuality, race, class, and size are absolutely required here.

You only need to read up on the times Instagram has deemed fat uncovered bodies as inappropriate nudity, while slim, fit, exposed bodies are deemed inoffensive.

Women’s bodies are sexualized – for no logically justifiable reason – every single day.

"An Open Letter from Black Women to the SlutWalk."

"Will the awful power of the word 'slut' defeat feminists' efforts to reclaim it?" by Jessica Valenti

"Link Round Up: Feminist Critiques of SlutWalk" by Feminist Frequency

"Will SlutWalks Change the Meaning of the Word Slut?" by Megan Gibson