The first in a series of posts about different facets of feminist activism online, the disturbing pitfalls of being a woman on the Internet, and how being online has reinforced to many the work that still needs to be done.

We all know how dismally toxic the Internet and social media can be for women. What worries me is how banal this knowledge has become. This knowledge is so self-evident, so widely known, so relatively undisputed (save for the self-appointed, mansplaining Devil’s Advocates among us who are likely to downplay or deny) that the harassment of women begins to feel naturalized. Even though sexism and misogyny are systemic, structural, and deeply engrained, and need to be acknowledged and recognized as such, it is extremely dangerous to begin to see the tormenting of women in virtual spaces as inevitable  – or worse still, a necessary byproduct of being a woman online that women have to accept and cope with if they want to participate.

It is so bad that we have all kinds of comparative mechanisms for evaluating gendered harassment and sexist attacks  – “it’s not that bad, ” “it’s not as bad as _______,” “it’s not like what________ experienced.” What level of online abuse and harassment and/or threats based on gender is acceptable?

As women, our expectations can become so low that we feel grateful to have evaded online abuse, rather than feeling that getting to
1. exist, 2. participate online and (if applicable) 3. present ourselves as feminists without being attacked is a basic entitlement.

Of course, these pitfalls can affect women through online channels regardless of how much they put themselves out there online. It’s not just the most social media active and outspoken people  – women who have any online presence, or who must use social media for their work, or who simply have an email address, can be targets.

The ease and inextricability of digital communications gives an enormous amount of 24/7 access to strangers and public figures and have emboldened many with an enormous sense of entitlement to this access.

I often refer to discussion of this topic as “women online” because as many woman identified or otherwise socially marginalized people know, just being online, taking up virtual space and existing, let alone using platforms for feminist messages, can be dangerous. By being online, we rebel and claim space for our thoughts, voices, and lives. And not everyone wants us to be in these spaces. We need to be, because: 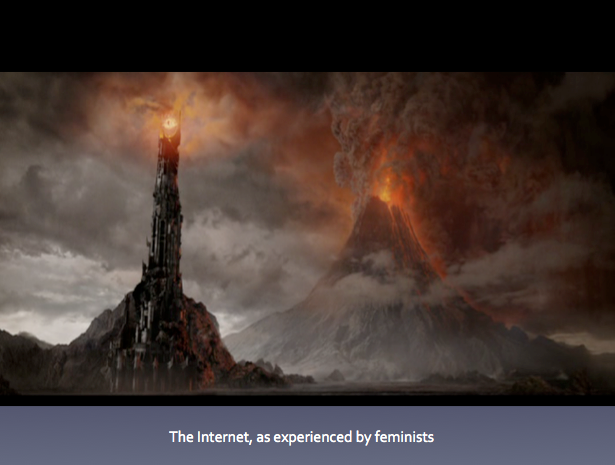 Trolling. Personal insults. Misogyny. Rape threats. Death threats. This toxic hellscape can be a reality for any woman or marginalized person, not necessarily those who identify as feminists or are doing overtly feminist work online.

Not surprisingly, the issue of online hostility and harassment of women and other marginalized people has only intensified as online platforms have become increasingly employed in social justice and activist work.

The sexism that percolates in the non-virtual world often translates into virtual spheres as unfettered and anonymous access to harass and abuse women. The argument that actions in virtual realms are less significant or meaningful than in the so called “real world” is often used to dismiss the abuse that occurs there. What happens to women online matters and has real effects, not least of all because of the fact that online harassment and abuse often contain real, offline threats. With rapid and increasing integration of digital technologies and platforms into every aspect of our lives, it’s unrealistic to expect women – or anyone – to be able to ignore what occurs there.

It strikes me what gargantuan expectations we have for women’s resilience in an increasingly hostile climate where the sexist status quo is critiqued but remains resistant to radical upheaval. How could we possibly expect women to ignore and not feel threatened and terrified by misogynist abuse, and rape and death threats?

Male privilege can be an incredible shield to feeling truly threatened by cruel comments and attacks.

I believe that online dialogue and activism are powerful ways to provoke cultural norms and beliefs to change and evolve. I know for myself, my feminist consciousness really arose in the age of blogs and Internet content because I felt able to learn more about different experiences and issues I wouldn’t otherwise have access too. For me, online writing and using Twitter and Facebook to discuss feminist issues and concern is interwoven with my experience of feminist activism. But our cultural contributions are hampered by toxic, sexist online spaces.

I’m reminded today of a status I posted two years ago while working as a web and social media editor and comment moderator:

We can’t accept the toxic hellscape. When I feel discouraged, I think of this quote from a great, feminist friend who told me this after some disappointing experience online that I can’t even remember:

“Remember that the Internet is a Mad Max-esque place. And you are Imperator Furiosa.” 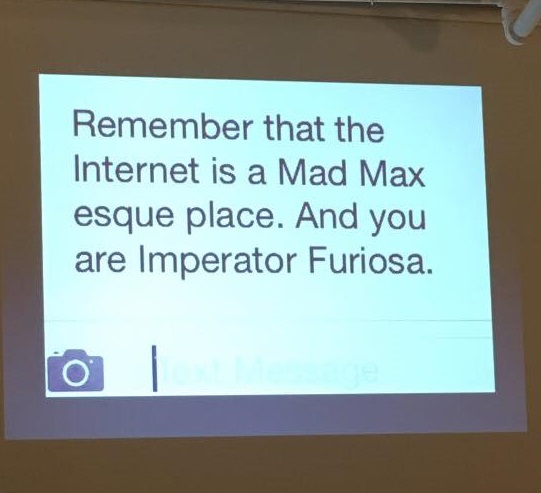 Posted by Zaren Healey White at 10:30 AM