"I am Ringwinner and Luckwearer; and I am Barrel-rider": Expecting The Hobbit

In honour of the upcoming release of The Hobbit: An Unexpected Journey, I have been thinking about my love of The Hobbit and The Lord of the Rings trilogy, an interest that started at a young age and has continued, uninterrupted, into adulthood.

When age and experience doesn’t alter or undercut something you love  (I mean, I still appreciate My Little Pony but not with quite the same gusto), then you know that thing is really special. I don’t remember a time in my life when I didn’t identify as a Tolkien fan, and know all the characters of The Hobbit and The Lord of the Rings. This is how it began: 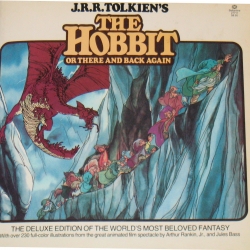 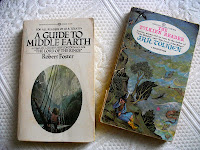 My parents were (and continue to be) LotR fans. Perhaps my fanship was predestined, and I had no choice in the matter. All I know is I was exposed to The Hobbit and The Lord of the Rings from a very young age. This fabulous animated storybook of The Hobbit (and an amazing book on cassette tape that accompanied) were early sources of entertainment for six-year-old me. I remember listening to the cassette tape in my dad’s truck during long drives to go camping. It never got old, and I craved to know as much as possible about Middle Earth. Luckily, I was equipped with A Guide to Middle Earth and other Tolkien resources as, you, know, the Internet was still a pretty new thing.

Having gone on to love and devour books, I credit the The Hobbit and The Lord of the Rings as crucial kickstarters to my fascination with fiction, fantasy especially. The Hobbit is the quintessential ordinary life-turned-extraordinary story, and there’s never been a time in my memory that I wasn’t inspired by Biblo’s heroism and reluctant adventure participation.

From my parents I inherited these excellent old editions (that they used in high school) of the books. The first time I read each novel, it was these copies. 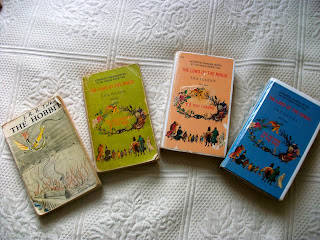 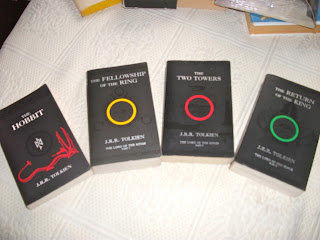 Now when I re-read I use snazzy new editions. Display versus real use copies of the same novels = hardcore. 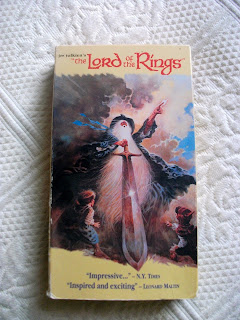 The old school animated movies on VHS were an endless delight to me. The 1977 animated The Hobbit and 1978 The Lord of the Rings were constantly watched and rewatched throughout my childhood. In grade three I first read the non-illustrated The Hobbit novel, but I didn’t actually read the LotR trilogy until junior high.

I vividly remember feeling a sense of juvenile anxiety and jealousy over the release of the Peter Jackson movies, sharing something I loved so much with a wider audience. Growing up, I introduced many friends to the existence of The Lord of the Rings and had mixed feelings about the production of the film franchise.

I’ve been thinking about how hard it is, even for an almost life-long fan, to remember a mental visualization of The Lord of the Rings not influenced by the films.

I mean, everyone knows Aragorn depicted as this dreamboat: 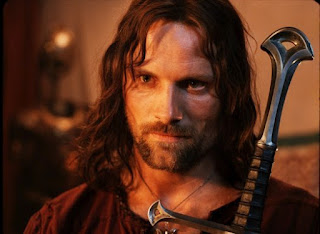 But my first mental conception of Aragorn was this guy: 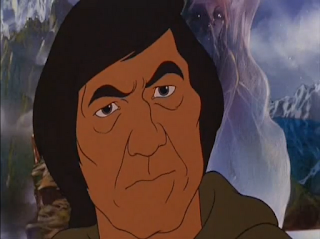 My favourite character is and always has been Legolas, and that was long before Orlando Bloom. My eight-year-old self still swooned for this incarnation (note that my costume was based on the book description of Legolas, not the ’70s animated movie): 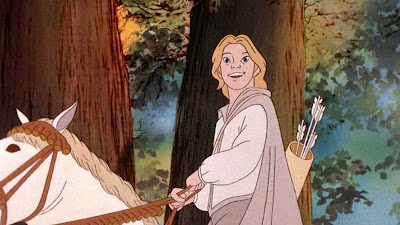 And as much as I love to play with toys at age 25, I still have my Legolas action figure unopened in the box. 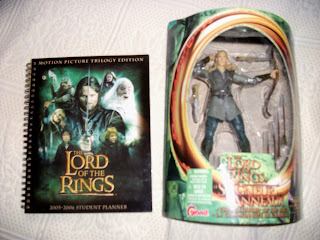 I'm looking forward to The Hobbit films, and while you’re seeing this: 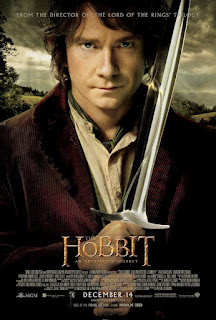 I’ll be picturing this: 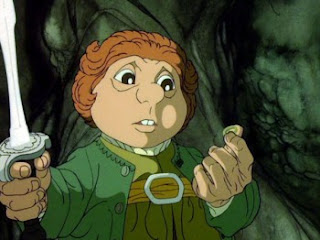 Posted by Zaren Healey White at 12:07 AM