Selfie Obsessed: The Connotations of "Selfie" and Thoughts on Going Make-Up Free 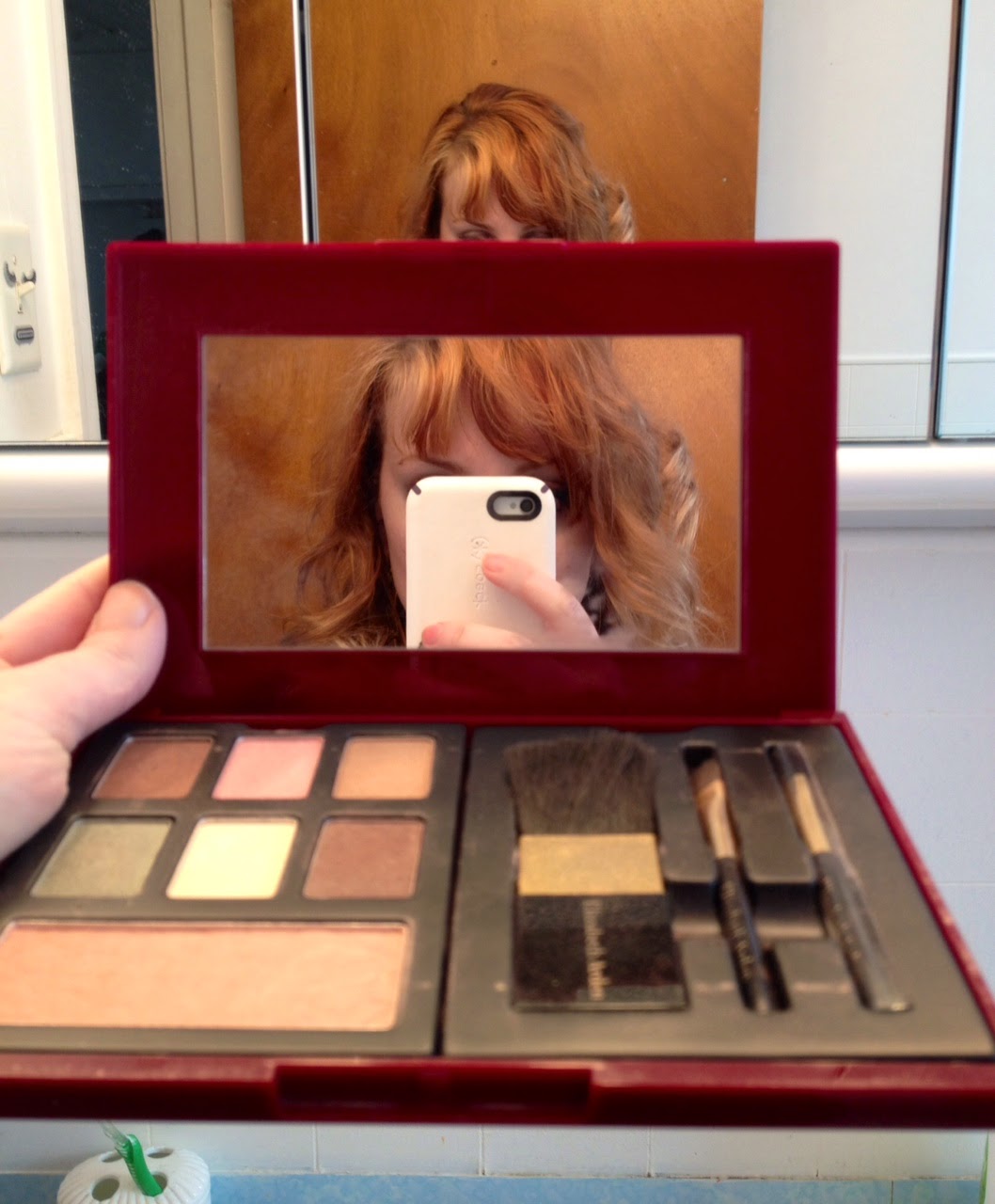 It’s time to lay down some thoughts on this “make-up free” or “bare faced” selfie viral movement. Interestingly, I knew people were nominating others to post a no-makeup “selfie” on Facebook before I even realized this movement was connected to, or had any origins in, a movement to spread awareness about and raise money for breast cancer. While the breast cancer campaign may have been the impetus originally, the way I’ve seen it manifest in my Facebook sphere has been largely disconnected. But that’s OK too.

Since the viral nature of the nominating/ sharing bare-faced photographs seems to have taken off perhaps tangentially from the original issue that prompted it, I’m analyzing the trend and movement in and of itself – aside from its charitable or benevolent underpinnings.

Some notes on the advent of “selfies”

Selfies have existed as long as photography has. We’ve always, with the advent of the camera, had the technology and ability to both be in photo and to be the controller of that image. Of course it’s important to distinguish between a photograph of one’s head and a self-photograph or selfie – the selfie requires the subject to also be the taker of the image. The gaze is self-directed.

So while selfies aren’t new, the ease with which we take them is, due primarily to what I will call the “turn-around camera” of the contemporary smartphone. Now, we can both take the photo and see it as it is being taken – we can watch ourselves, watching ourselves. But the act of taking/ posing in the selfie on its own seems unimportant to how this phenomenon is understood and judged – it’s the sharing of the image that matters.

We’ve always been able to select the photos – whether film photographs printed and placed in an album or digital photographs e-mailed or put on Facebook – we want others to see. The inherent vanity embedded in the act of choosing a self-photograph to share with others isn’t new. What’s new is the amount of control over the process from start to finish – I can take the photo of myself and style my own image to look exactly how I want it to look, then I can immediately take that same photo and show it to whomever I want.

So why are people so up in arms about selfies?

I think the reason this no make-up online “craze” (as I’ve seen it described in some articles and opinion pieces), is garnering so much attention has to do with our, as a society, vexed and ambivalent relationship with attention – getting it and giving it. Just as "selfie" is a relatively new coinage, so is “humblebrag,” a new spin on self-deprecation meets veiled bragging and fishing for compliments.

Many of us (I would argue most of us) want attention but have been taught we shouldn’t, or at least that we shouldn’t admit it. Based on the overarching ideology of wanting to be judged as attractive and appealing to others, when we post a selfie we imply that we think we look good. Why would I post a photo in which I think I look ugly? Of course, that is always up for the wolves of the Internet to decide. But it’s the act of taking and posting the selfie and making that silent declaration of confidence in one’s own appearance that has mobilized the selfie as both an innocuous act of social networking and a self-actualizing statement of pride in some aspect of our individual identity.

We live in a society that coaches individuality and self-confidence, yet still teaches us to judge the confidence and self-possession of others as arrogant/ self-centered/ vain.

I found one article claiming that the make-up free selfie is still narcissistic, as though that was a revelation. Umm yeah? Any projection of the self into visual culture and social media can be called narcissistic - and who says narcissism is necessarily always negative? We tread a fine and blurry line between teaching girls and boys to be confident and free and then shaming them for appearing so.

This is what makes the selfie both mundane and arcane.

In terms of how this connects to this make-up free stuff, there are a lot of politics at play, and some interesting critiques of the trend, as well as critiques of the critiques. Some will say the fact that showing your bare face on Facebook is something of note is sad, that it’s indicative of how oppressed women are in terms of the pressure to conform to appropriate presentations of feminine (made-up) selfhood. Others are looking at it as a powerful way to circumvent the traditional narrative of the selfie – in which the styled, prepared, and made-up self is posed and presented for consumption for others. A few thoughts on this:

- Not all women wear make-up or care about cosmetics in the slightest, so to suggest that women going bare-faced is revolutionary, in any small sense, is a tad totalizing. I know many women for whom to be photographed with make-up would be the bizarre occurrence.

- To pretend that selfies rely on make-up to be successful is silly. Don’t we all know the real foundation of the flattering selfie relies on pose, lighting, expression, and filters? Personally, I’m indifferent about whether or not you see me without make-up. For me, the frightening part is to be photographed expressionless – no flattering angle, no smile, no holding of my features in an arrangement that I feel makes me attractive. And again, lighting – make-up or no make-up, every photograph relies on lighting. Let’s recall Jerry’s two-faced girlfriend in the Seinfeld episode "The Strike" – different lighting = different woman.
-The advent of the immediate filter via Instagram and similar apps has changed selfies. Who doesn’t look better in Walden? 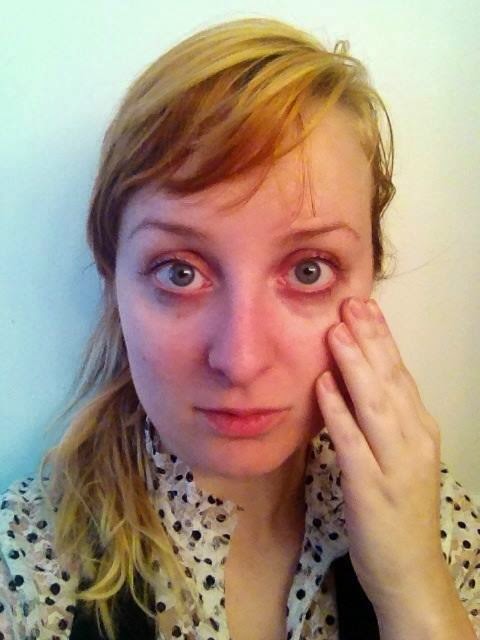 - Sharing a selfie without the crutch of make-up is inconsequential – you’ve still selected a photo you’re happy enough with (in one way or another) to show to others. I took a make-up and nail-polish free selfie with a neutral (not flattering) facial expression and bright/ direct lighting and shared it – but I still had control over the image and although it looked different than the usual “face” I project, it was still an image I was comfortable sharing. No great feat.

So while I celebrate the idea of ditching normative expectations of how a woman “should” look, let’s not forget that, as part of a longer historical narrative, wearing make-up could be the act of resistance. We come from a lineage in which certain cosmetics made you “a harlot” and we still live in a world in which the heavily “made-up” may be judged alongside their clothing as connected to their character and sexuality. Women are taught they should be beautiful, but also denigrated for "trying too hard" or, worst of all, thinking they are. So wear make-up if you like! Don’t let anyone tell you that going naked faced is the only way to show your “true self.”

Finally, the best thing that’s come out of this movement would be the fun parodies. I don’t normally approve of the word bitch, but I’ll make this one exception: 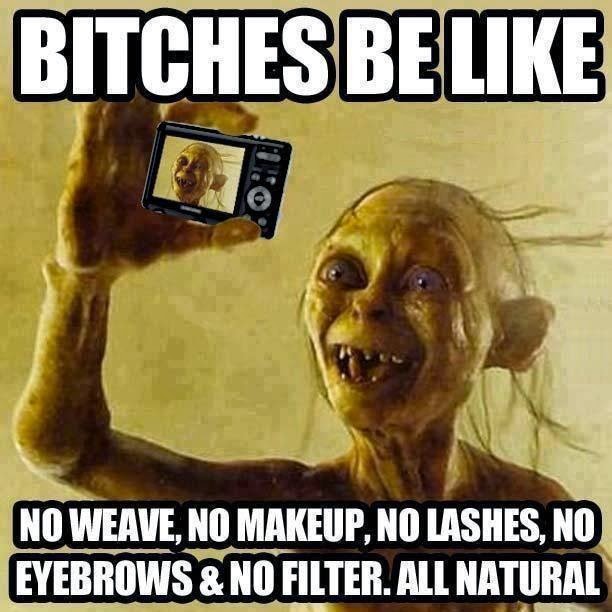