How I Learned to be a Girl: Thoughts on “Femininity” and Those Horrible Veet Ads

10-year-old me was humiliated when her mother insisted it was time to invest in a bra. There had been one too many bra-less soccer games, and her throes-of-puberty body could not be ignored any longer. She was deeply embarrassed by her body and her femininity. Ew, boobs!

If someone had told 10-year-old me she would someday love clothes, cosmetics, hairstyling, and many stereotypically female and feminine things, she wouldn’t have believed you.


10-year-old me wore baggy green painter’s pants and an old XL t-shirt with a Newfoundland dog on it. And so many tracksuits.

More importantly, 10-year-old me only wanted to play boy roles in make-believe. My friends and I had extensive and elaborate make-believe narratives and I liked to be the prince, the warrior, Simba, the monster – mostly male or masculinized characters.

As I’ve since come to understand, this had everything to do with the exciting, adventurous roles I saw boys and men portraying, and nothing to do with not liking being a girl.

I’m taken back to my childhood only because I’ve been thinking about how we learn what it means to be masculine or feminine.

In my early 20s, I would often joke with one of my close friends about how I thought “like a man.” About how I found myself behaving “like a man,” approaching romance and sex “like a man.” For a pop culture example of this concept, I think of the Sex and the City Season 1 episode where Samantha suggests the women should learn to have sex like a man. Rewatching this episode more recently, I find it much more problematic than I did a few years ago. I love the show, but it perpetuated a pretty stagnant and unilateral suggestion of men’s attitudes towards sex and relationships (which, I feel, the show later moves well beyond with several different, well developed male characters). Of course not all men approach sex the same way, as not all women do either. It was also a completely heteronormative attitude towards gender roles.

Then one day, several years ago, something switched in my brain and I no longer saw myself as a woman who had some masculine traits, but as a woman, a feminine woman, and these elements were part of my femininity.

I recognize and appreciate that I can’t undo the legacy of male and female stereotypes and norms just because I try to personally subvert them. It’s more complicated than that. And as my partner, the sociology graduate always reminds me, there are social realities that persist outside my philosophical ideals of undoing gender assumptions.

Still, I continue to imagine that femininity doesn’t have to mean one narrow set of expectations, nor does masculinity. And note I’m saying femininity and masculinity – not femaleness and maleness. I’m talking about the concepts attributed to members of either gender.

To borrow from something I wrote for a class recently: these signifiers – masculine and feminine – denote characteristics of the male and female sex/gender. And if lots of men love baking and babies then isn’t that masculine? If lots of women love video games and beer and weight lifting then isn’t that feminine? There’s a breakdown between traditional ways of denoting male and female identity/behaviour and how these identities and behaviours actually play out in reality, in the present, in any given culture.

I think many people will quickly get on board with accepting that women don’t have to wear dresses or make-up to be feminine, but where does society at large stand on body hair?

Just this week (April 7), Veet released – and has since pulled – a sexist and ridiculous advertisement with the tagline “Don’t Risk Dudeness,” depicting women with hairy legs as repellant to men (don’t even get me started on the implicit assumption that women’s reasons for shaving are rooted in heterosexual relationships, either).

Beyond the message that hairy women can’t possibly be feminine or appealing to men, the ad was outright belittling even in its execution of the “joke.” Unlike the “real” man, who is slim and conventionally attractive (and, notably, very hairless…), the dudely woman is meant to be read as an unattractive buffoon – very hairy, bearded, out of shape.  Another, related commercial, shows a woman transforming into the same hairy man when she goes to hail a cab and – the horror! – her underarm hair is visible.

To their credit, the Veet marketing people have apologized and were receptive to feedback. I did note, however, that they used the “we're women too and we thought it was funny” approach to legitimize the perspective. Sorry, but sexism by women against women is still sexism.

There was a tonne of outraged backlash at these ads and the suggestion that women who don’t shave their legs or underarms – or haven’t shaved today – turn into men. But let’s take it a step further – what was it saying about women who never shave? Who couldn’t care less about shaving or waxing body hair and don’t participate in the socially sanctioned practice?

And if leg and underarm hair are constructed as aberrant, what about untouched sideburns and upper lip hair on women? Are these women actually men? Why is hair in some areas OK and other regions outlawed?

To reverse it, how come men who remove their body hair don’t turn into women? Lots of men shave their chests, underarms, pubic regions, even legs, for all kinds of reasons. The man depicted in the first ad is pretty smooth. Is the masculinity of these men called into question? Or is body hair removal a choice for men and an imperative for women?

How did such “natural” elements of the human body, such as body hair, get so twisted up in notions of what is means to be a woman or a man? 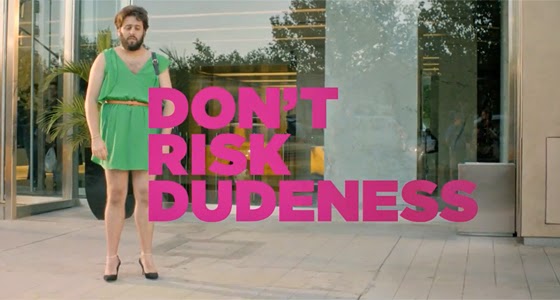