"You have to be so careful these days."

"You can't say anything to anyone anymore."
"No one can take a joke."


No, no, no. Workplace sexual harassment is not about people being “oversensitive” or unable to take a joke. It’s about your conduct making your coworkers uncomfortable to the extent that it has a negative impact on them, their work, and the whole work environment. If you can’t imagine a comment, a gesture, a look making you feel uncomfortable in your workplace, consider your privileges. What privileges do you bring to work everyday that may cause you to feel a bit more immune?

The kind of conduct coming under intense scrutiny isn’t only now unacceptable. It isn’t that times have changed – the conduct was likely always deeply inappropriate and alienating but workplaces weren’t effectively setting standards for conduct and properly protecting the rights of workers.

There seems to be a lot of misconceptions or confusion about sexual harassment, what it is, who can commit it or be the victim of it, and how to go about dealing with it.

Discussions of sexual harassment are circulating constantly in Canadian media at the moment, following the last two weeks since allegations of sexual violence (outside of work) as well as workplace misconduct and creation of a hostile environment broke about former CBC radio host Jian Ghomeshi (see my most recent blog post about Ghomeshi here). More recently, two Liberal MPs, including a Newfoundland and Labrador MP, Scott Andrews, were suspended from the Liberal caucus pending an investigation into alleged “misconduct” (the term sexual harassment has also been used in regard to this situation) reported by two female MPs.

When someone says “I was sexually harassed” or “so and so has been accused of sexual harassment,” what kinds of things do you think of?

I think the most important thing about sexual harassment that people need to remember is that it’s far more than the old-fashioned, stereotypical improprieties that usually come to mind – unwanted touching, sexist jokes, leering, offering someone a promotion, an advancement, a good grade in exchange for sexual favours or dates (called quid pro quo sexual harassment).  Sexual harassment goes well beyond grabbing asses or asking a coworker out repeatedly. All these things are absolutely sexual harassment, both inside of and outside of the workplace, but it goes further.

I want to proffer the terms “gender harassment” and “gender-based harassment” as useful to always keep in mind when discussing the broader umbrella term of sexual harassment.

First, there are issues with reducing everything to sex, sexuality, and the biological “sexes.” I’m sure most people interested enough to read this essay know that sex and gender are related but different concepts. While sexual harassment is still a useful, overarching term, and currently the accepted term to convey these types of misconduct, I find it can cause people to overly focus on the blatantly sexual or sexualized forms of harassment and conflict between the so-called “opposite sexes,” and thus focus less on harassment on the basis of gender.

To borrow from the Memorial University Sexual Harassment Office overview: “Comments or conduct of a sexual nature and/or abusive conduct based on gender, gender identity, sex (including pregnancy and breast feeding) or sexual orientation directed at an individual or group of individuals by a person or persons of the same or opposite sex, who knows or ought reasonably to know that such comments or conduct is unwelcome and/or unwanted.”

It seems a lot of people can’t imagine someone in power, like an MP, being so careless as to sexually harass a peer. It seems like an obvious thing to avoid, right?

The thing to remember is that a lot of behaviour falls under sexual harassment, some of which happens so carelessly and continuously in a society that is still quite sexist and patriarchal that many claim to be ignorant that they have committed it.

To again borrow from the Memorial University definition:

Sexual Harassment includes but is not limited to:
unwelcome sexual invitations or requests;
demands for sexual favours;
unnecessary touching or patting of a person's body;
leering at a person’s body;
unwelcome and repeated innuendos or taunting about a person’s gender, gender identity, sex (including pregnancy and breast feeding) or sexual orientation;
unwelcome remarks or verbal abuse of a sexual nature; 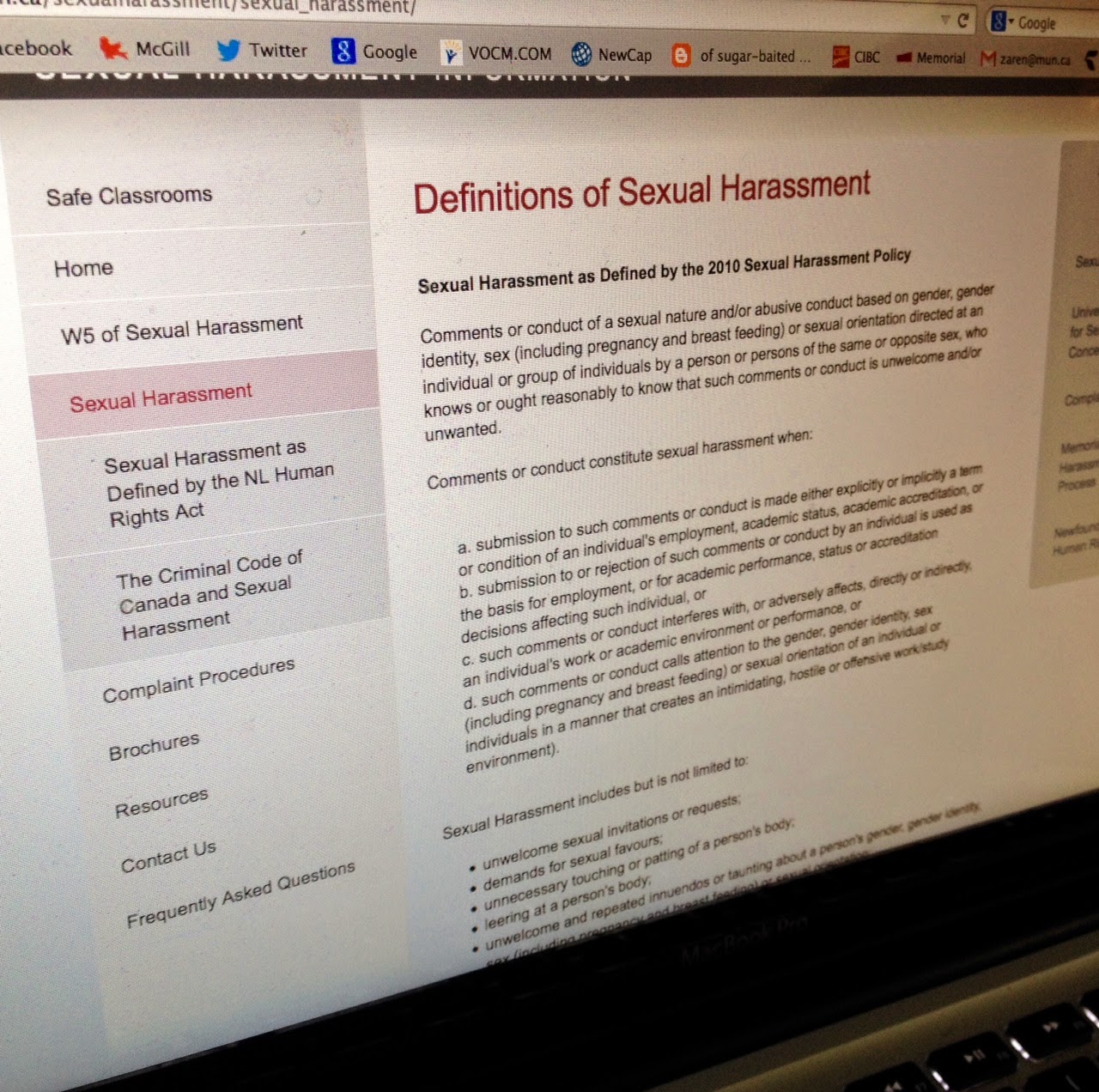 visual displays of sexual images perceived to be degrading or offensive;
unwelcome remarks or verbal abuse based on gender, gender identity, sex (including pregnancy and breast feeding) or sexual orientation which are demeaning or degrading;
threats of a sexual nature;
sexual assault and;
any other unwanted verbal or physical conduct of a sexual nature.

So, as you can see, abusive behaviour about one’s gender and gender identity absolutely fall under sexual harassment, but I find, through public conversations about these issues, people often forget or overlook these aspects and assume every sexual harassment complaint is something uniquely and specifically based on sex and sexuality.

Another crucial conversation to have is the idea of intent versus impact. Yes, perhaps you made a comment about my body or a joke about my gender and didn’t mean it to be offensive or alienating. Perhaps, you were trying to give me a compliment. That doesn’t matter if I’m uncomfortable. My impact trumps your intent.

This doesn’t mean you can never touch a coworker again, never make a joke, never give a compliment; it’s about using good common sense and learning to be intuitive about the feelings and personal autonomy of your coworkers. It’s about checking your privilege (your male privilege, your straight privilege, your cisgender privilege, your able-bodied privilege, etc.) and taking time to really consider how your words and actions affect others.

This is all the more crucial if you’re a manager or boss and have to try to foster a safe and healthy work space for your employees, as well as ensure you aren’t complicit in any harassment or workplace toxicity.

For example, it’s really important that men step outside their unearned privilege as men and imagine how something they want to do or say might make a female coworker feel. Maybe, as a man, you’ve never had your personal space or bodily autonomy invaded or threatened. For many women, this is commonplace.

You also need to think about your individual relationships with people you interact with. Maybe you have a rapport with someone and you have gotten to know each other’s senses of humour. Maybe you are friends outside of work. Maybe you’ve gotten to know each other as friends enough in the workplace that you feel confident that to offer a hug on a special occasion would be OK. Avoiding sexual harassment isn’t about avoiding ever speaking to or interacting with coworkers on anything other than work again – it’s about keeping at the forefront of your mind how something you might do would affect them.


Here are some questions we can all ask ourselves in the workplace to make it a better, healthier place:
This isn’t about being “politically correct” just to avoid insulting people. It’s about being respectful because people deserve respect.

Everyone will make mistakes. It’s OK to screw up as long as you can recognize it and apologize. No one expects you to never misspeak, but to be open minded and self-reflexive enough to consider how your actions impact others. We should all try to do this.

Sexual harassment in the workplace doesn’t only become “true sexual harassment” once there’s a complaint or grievance – it happens all the time and may never get reported. There are a lot of factors that can make a workplace toxic or hostile. A little more self-reflection and thinking before speaking on the part of every single person would make a big difference.