I expect that this blog entry is likely preaching to the choir (odd reference for me as an atheist?) because I don’t anticipate that this scenario is currently happening:


Woman who believes she doesn’t need feminism: “Hmm, maybe I’m misinformed or am misunderstanding what feminism is. Maybe I’ll look for some helpful resources.”

“Oh! Now I realize what feminism’s all about and I’m in!” *thumbs up*

Yeah, probably not. Feminist blogs and magazines (including this column by Jessica Valenti) have extensively covered reaction to the imagined absence of a need for feminism in 2014 as seen in the very upsetting tumblr Women Against Feminism and other anti-feminist or “post-feminist” proclamations.

I expect that anyone reading this is well aware of my implied conviction in the need for feminism, as I’m undertaking a Master’s degree in gender studies, write a feminist blog and for a feminist online magazine, and, more importantly still, attempt to be a feminist activist in my daily life. Still, with so much attention lately on the problem of not only men’s rights activists, but fellow female-identified people disputing feminism as valid or useful or good, I thought now might be a good opportunity to explicitly decry those sentiments.

You all need feminism, even if you don’t realize it.

As a point of entry, I’ll respond to a few “against feminism” sentiments I’ve come across online.

“I don’t need feminism because I don’t hate men.”

How is this misconception even still kicking around the cyber gutter? It’s disconcerting to realize that anyone – any women – is conflating feminism and women’s rights with a hatred of men. I don’t hate men either. I love them. Especially men who are also feminists :)

“I don’t need feminism because my husband is my best friend and he treats me like a queen.”

BENEVOLENT SEXISM ALERT. OK, so feeling loved and revered is great but does he treat you like a person? I, as a woman person, like to feel loved and treated well by my male partner, but his respect of my personhood is much more important to me. Another poster on this tumblr said she doesn’t need feminism because she likes to treated like a lady by a gentleman. Yes, and feminism will strip you of your coveted ladyhood!

“I don’t need feminism because it’s just another trend.”

“I don’t need feminism because I want my boys to grow up knowing what TRUE equality is.”

Yeeeeeah that would be feminism. Equality is kinda the whole point.

“I don’t need feminism because I am the sum of my deeds not just my body.”

And yet eons of patriarchy has often reduced you to your body and perceived biological difference and completely erased any interest in your deeds!

“I don’t need feminism because my husband and I respect each other. And I’m the breadwinner.”

And the work of feminists and women’s rights advocates has made it possible for you to work outside the home at all! Not to mention vote and be a citizen.

“I don’t need feminism because they reject femininity but try to feminize men, and demand equality but ask for special treatment.” 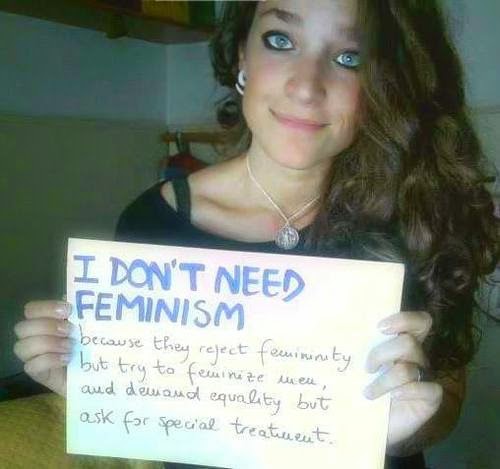 I can’t even. Ok, if I must: There is no correlation between feminism and rejecting femininity. Feminism isn’t about whether or not to wear pink and like flowers (which is, in itself, an asinine reading of what it means to be “feminine”). There is not one way to be feminine and redefining and challenging notions of how femininity and masculinity are constructed and reinforced is part of the point of feminism.

Recognizing the rights of and valuing the needs of oppressed groups is not the same as special treatment. Groups and persons that have been historically and systemically denied rights (because of the privileges of non-oppressed groups and persons) deserve to have their needs addressed. Taking action to address gender stratification and make up for the unnatural (socially constituted) subjugation of women isn’t special treatment…ya fool.

I could go on but there are hundreds of these and it’s a bit painful. My main point is that many women, whether it be a celebrity who denies she’s a feminist or a woman who submits to such a tumblr, don’t seem to be making the connection between their perceived rights, freedoms, and lived experiences and the work that feminism has done.

As women, we’ll never know what our lives would be like in an alternate universe had history proceeded similarly but had what we now know as “feminism” never arisen, never taken root, never had an impact. It is ignorant and naive that these women – the very persons that feminism aims to make recognized as equal persons deserving of respect and dignity – are so unaware of what feminism means and how it has served them. This isn’t my way of saying “feminism helped you, be grateful” – it’s not a debt repayment thing. Although, I do often feel quite privileged to have been born into this era of life on planet Earth as opposed to others.

Unlike men’s rights activism and the like, women against feminism disturb me on a deeper level. I’m used to (some) men being completely unable to recognize that feminism is not about, in and of itself, being divisive and pushing men down so we can “rise up” (and take over!) That’s utterly foolish.

Still, I want to make a call to action to my fellow female identified persons and feminists to stop being afraid of being perceived as radical.

For years, my own feminism as an ideology was passionate but diplomatic to a flaw, so concerned about avoiding alienating others that I avoided confrontation, kept some criticisms to myself, and silently mused condescending critiques of the sexists I encountered but avoided engaging with. I can’t truthfully say I always speak my mind today (that would be a constant and unrelenting diatribe!) or that I don’t, almost daily, let something slide because I’ve decided it’s not worth my personal discomfort.

Still, daily, although I live a life that enjoys several locations of unearned privilege, I recognize the faint odors of sexism, misogyny, and patriarchy around me.

Now, to conclude, I’m sending a big virtual bouquet to the local women with the St. John’s Status of Women Council who made their own, excellent tumblr about why they need feminism.

Feminism is not “done.” It’s not outdated and it’s not finished. And if you or someone you know is ever having trouble with the definition of feminism, remember: 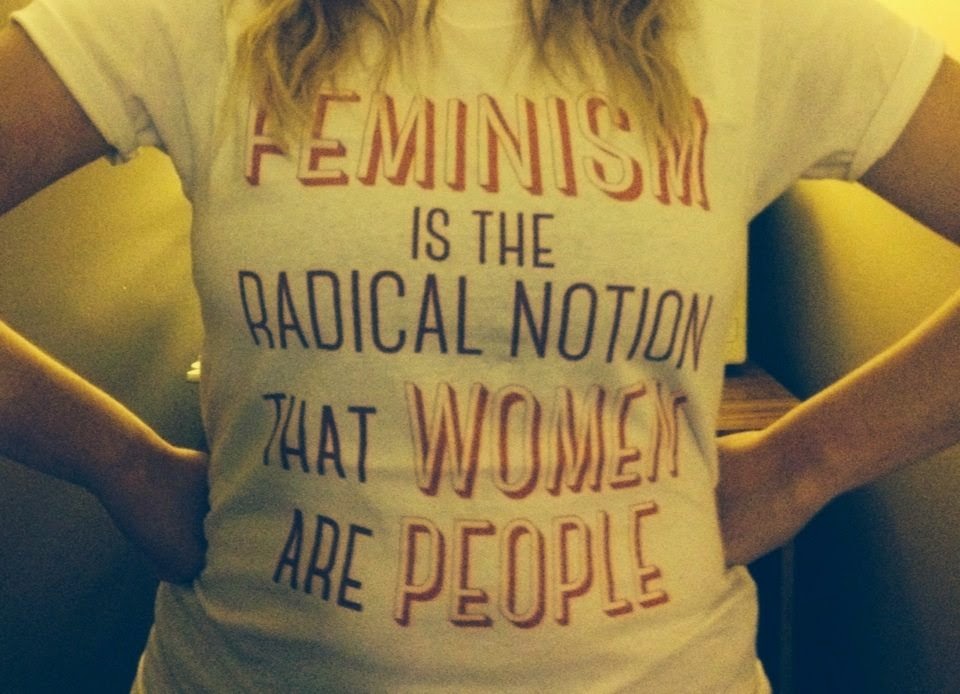