Booties, Body Love Anthems, and Skinny Shaming: or, What We're Not Saying About Fat


Considering that a lot of pop music and pop music imagery (because, let’s face it, it’s pointless to analyze the songs without also looking at their videos) promote normative images of compulsory femininity and beauty, it’s refreshing to see the emergence of self-love and body positive jams. Especially when they make it to the mainstream.

Sir Mix-a-Lot’s magnum opus, “Baby Got Back,” definitely makes me feel good about my “junk in the trunk” (à la Fergie) but I’m definitely more enthused when a woman pens an anthem about women’s bodies.

Since most of the music I consume is online, I usually listen to a new song while simultaneously watching the video. When I heard about a song called “All About That Bass” by, previously unknown (to me) Meghan Trainor, I went to watch the video.


I’ve had a lot of evolving reactions to this piece, and other subsequent body-focused songs by women, and I’ll walk you through them now.

First, of course, I’m wide-eyed dazzled by pastels and awesome hair bands. How could I not like this song? In terms of content, it’s promoting self-love and body positivity. In terms of music, it’s very catchy and fun to listen to. Still, some aspects of both the lyrics and the video bothered me. Why is the only ostensibly fat person in the video a man, when the song is all about women’s body image and self-love? And, of course, while Meghan Trainor isn’t super thin, I wouldn’t consider her “plus-sized” by any means.

And what’s up with “no treble?” If bass = booty, I can only deduce that treble = boobs. I mean, I know booties are super en vogue in the mainstream now (hint: You didn’t bring booty back, it was never gone, read more here) but are breasts uncool now or something?

Also, there has to be a way to celebrate “curves” (and other euphemisms we’re more comfortable with) without dissing those who are thin.

And finally, although this observation isn’t the focus of this blog post, the song is both heteronormative (typical for pop music but still bothersome) and suggests men’s physical/sexual preferences as a justification for a woman’s bodily self-acceptance (Yeah, my mama she told me don't worry about your size/She says, “Boys like a little more booty to hold at night”).

This leads to my overarching issue with any such body anthems and how fat is constructed in culture generally: we are OK with body fat, as long as the fat is located in certain places and not others.

A song that emphasizes a woman’s stomach fat would not be so palatable as those that focus on bums and booties.

Jennifer Lopez can draw attention to the mesmerizing (I couldn’t look away) contours of her booty in her aptly named video “Booty” (because it isn’t so much of a song as a video with some accompanying music) but she’s still fit and toned as hell overall.

Due in large part to feminist media, we’ve come a long way with getting beyond weight. Images such as the one below highlight that a woman of any given numerical weight can look very different from another of the same weight. So maybe we’re smashing scales and ditching obsessing about BMI but, visually, we can’t deny that body image and self-love anthems come with limitations. 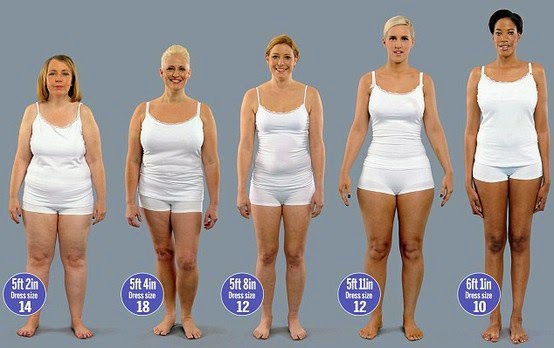 As Chloe writes for Feministing, even if Trainor’s “skinny bitches” line was a joke, it still poses problems for a song steeped in body acceptance. I largely agree with her analysis, so will quote it at length:

“Calling thin women bitches isn’t helpful, at all. Calling women with curves ‘real women’ isn’t productive, at all. So stop it. If every inch of you is perfect, curvy women with boom boom and junk, then every inch of the skinny girls is too. They just have fewer inches. Trainor has said that the ‘skinny bitches’ line is just a joke, and that she’s alluding to the fact that even a lot of ‘skinny bitches’ think they’re fat, but that merely assumes that being fat is, in fact, bad… which pretty much contradicts the entire message of the rest of the song.”

Of course, if we want to talk about the problematic valences of “skinny bitches,” move over Meghan, enter Nicki.

In theory, Minaj’s new song “Anaconda,” with its resounding chorus of “Fuck the skinny bitches” should make me feel great. I mean, I don’t know precisely where I fit into the taxonomy of women’s bodies, but I’m fairly certain I’m not “skinny.” So I should love “Anaconda” I guess. Maybe play it when I slow-strut down the street in tight pants.

No. By the time we reach that awkward lap dance with Drake and the deluge of lyrical skinny shaming I’m just deeply uncomfortable.

Do I appreciate what Minaj is doing? Yes. But as mentioned above, our obsession with fat has little to do with someone’s weight on the scale and everything to do with how that fat is distributed.

Nicki Minaj may be stacked on top and have a gloriously large butt but her waist is small and her stomach is flat. I’m not saying there isn’t a degree of bravery in depicting yourself as "big" in the music industry, but anyone with eyes can deduce that Minaj has a body that is culturally celebrated rather than castigated. 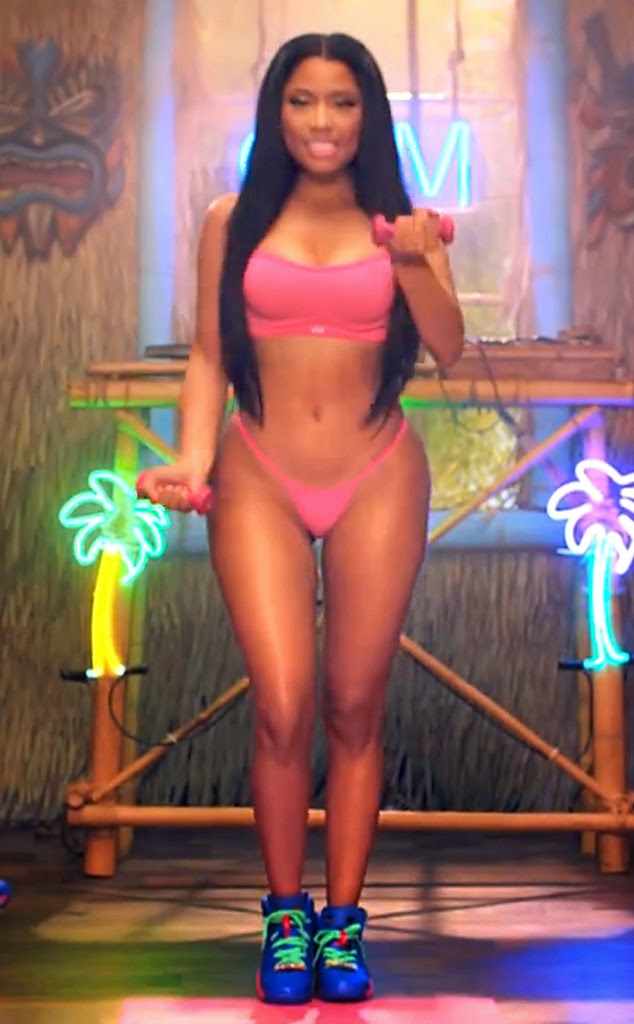 Body parts are culturally loaded – fat in some places may be reviled while an ample ass is revered.

So let’s go back to “All About That Bass.” Basically, in the course of thinking through my issues with the song and its shortcomings, and discussing it with some friends over wine, I realized that I tend to hold songs that may show some sort of explicit effort to inspire positivity to a higher standard than others that simply do not. I mean, I think it’s a natural tendency that many share, but still, why should I slam Trainor’s song and video’s deficiencies when, still, it’s endeavouring to spread something good, something well meaning.

I realize I don’t hold JLo’s “Booty” or Minaj’s “Anaconda” accountable in the same way for the limited scope of their, arguably somewhat, body positive concepts.

“All About That Bass” isn’t perfect by any means. Certainly neither is excluding the “skinny bitches” from the club in the name of celebrating large booties.

If you want lyrics that declare body positivity for fat in less socially exalted places, I’ll end off with Missy Elliott’s “Lose Control:”

“I’ve got a cute face
Chubby waist
Thick legs in shape
Rump shakin' both ways
Make you do a double take”
Posted by Zaren Healey White at 11:21 PM