Fifty Shades of Ghomeshi: Why this isn't about his "private" sex life 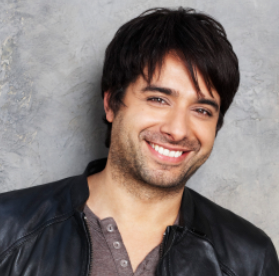 Normally, I wouldn’t invoke the link to E. L. James’s Fifty Shades of Grey franchise. Normally, I would worry that such a link would appear to trivialize or make light of the fact that women have come forward alleging sexual violence during personal encounters (including romantic/ sexual encounters) with former CBC broadcaster and host of ‘Q’ Jian Ghomeshi.

However, Ghomeshi himself invoked a Fifty Shades of Grey reference in his pre-emptive official Facebook post on Sunday.

“We joked about our relations being like a mild form of Fifty Shades of Grey or a story from Lynn Coady’s Giller-Prize winning book last year.”

This reference really arrested my attention. Reading this, not long after absorbing the breaking news that CBC had parted ways with the host, yet long before reading the startling and detailed Toronto Star report this morning, I kept coming back to the decision to make this reference.

Of course, we know Ghomeshi has hired a crisis management PR team and, since his intentions to file a lawsuit against CBC were immediately stated, we can assume PR professionals helped sculpt and refine his lengthy and candid statement, which can only be interpreted as an effort to put his side of the story out there first. Fair enough.

Still, I found myself wondering if Ghomeshi could have so readily made public some tidbits of his sex life in a pre-Fifty Shades world. I read Ghomeshi’s subtle but deliberate reference to the book as an attempt to garner sympathy by resorting to something that everyone knows of, even if they don’t know much else about BDSM. As though presenting his situation in a Fifty Shades context somehow neutralized the allegations by framing himself in the terms of this cultural product. After all, Fifty Shades is first and foremost a, bizarre, improbable, over the top romance interspersed with intricate descriptions of sex; elements of violence may be involved, and people may dislike its depiction of a young female submissive, but the sex is consensual. The reference, somehow, frames the message in easy-to-digest terms.

Also, Ghomeshi’s invitation to think of him as Christian Grey is nothing if not self-aggrandizing.

In the day since all this started breaking and since Ghomeshi’s first-out-of-the-gate Facebook statement dominated everyone’s newsfeeds, there have been some excellent articles tackling different aspects of this controversy.


“Women everywhere are sexually assaulted by men in power. Many don’t bother to speak up because of reactions and consequences like this: Ghomeshi is a man in power and he is also well liked and well known. Chances are, he will be almost universally believed, while she will be accused of lying to get something from him. And while there is an extremely small percentage of women who do accuse men of sexual abuse in order to get something from them, the majority of women don’t. The majority of women speak up because they want justice. And right now, we don’t know what the real story is – but as someone who never spoke up when a man in power put me through hell, for a variety of reasons – I believe her until further notice.”

Anne Theriault tweeted eloquently when the news broke. It’s hard to choose just one tweet to highlight, but this one particularly resonated. 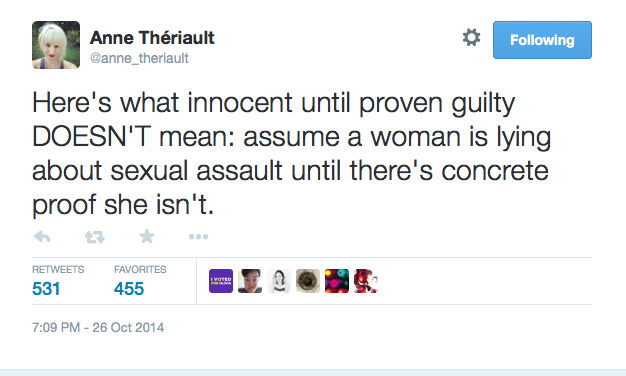 For my part, in this post I want to focus on an alarming and, so far, less discussed and analyzed aspect of this emerging story: the notion of sexual privacy and freedom.

It is highly unlikely, as others have noted, that CBC would dismiss Ghomeshi, a hugely popular and beloved show host, without significant deliberation and compelling evidence that his behaviour is, indeed “unbecoming” and, possibly, illegal. It is highly unlikely that they would risk the success of an eminent show and invite a tangly, high profile lawsuit based on being “prudish” or simply finding his bedroom practices unpalatable.

If you wouldn’t make the same argument to defend an accused consumer of child pornography – that what one does for sexual pleasure is private and not grounds for firing or legal recourse – then don’t make it here.

I’m an ardent supporter of personal autonomy and sexual freedom. I don’t think anyone should be dismissed or have repercussions in their public / professional life because of their sexual tastes and practices, as long as those preferences are consensual and legal. As Ghomeshi stated in his post “sexual preferences are a human right.”

I’m not condemning Ghomeshi. I’ve never met the man. I was neither a fan nor non-fan of ‘Q’ before all this. I don’t want a prominent Canadian radio personality to be a sexual aggressor.

Just because we don’t know what “really” happened and may never know, and just because we don’t know who is telling the truth, doesn’t mean we shouldn’t analyze and discuss this scenario, and the frenzy of varied reactions that have resulted from it. Sexual violence, victim-blaming, and the very real reasons many women cannot come forward, least of all publically and online, are conversations that need to happen.

When discussing this let’s remember: the “unbecoming conduct” that CBC supposedly learned about isn’t Jian Ghomeshi’s participation in rough yet consensual sex; it is alleged sexual violence.


What happens in the bedroom is private – until it breaks the law or hurts or exploits a person.